The Fantastic Facade at Universal Studios 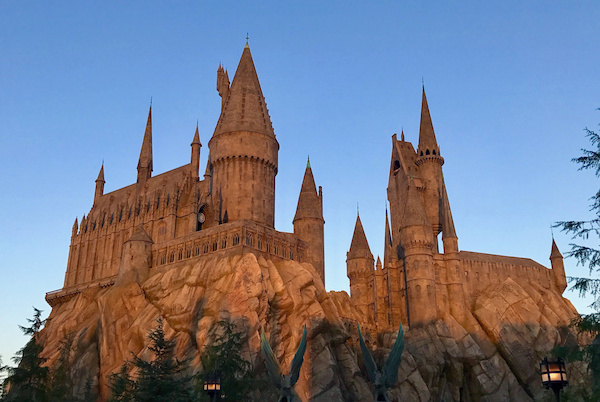 In Thanksgiving week of last year, we got what you might call a crowd-funded vacation. Families at the school where my mom teaches raised a few thousand bucks to help us through the loss of my dad, and she eagerly applied the funds to take us out of town and away from the pressures of family and friends for the holiday week. We were unanimous in selecting the Wizarding World of Harry Potter as our destination, fulfilling what was for (I believe) all of us a decade-long dream we assumed we’d never have the cash to conjure into reality.

Being idiotically Midwestern, we made the entire drive from St. Louis down to Orlando in the span of a single day (the idea of going by Floo Powder never seemed so sweet). Fans of the Harry Potter literary universe make this arduous trip to the Wizarding World complex to feel, just for a moment, that the magic is real and to satiate their thirst for it.

I found the week unequivocally delightful. This did require me to unplug many of my higher cognitive functions and tastes. The thrills were mostly without thought, and my perception of the place largely passive; you could say I was just along for the ride. Disassociating from the mind’s active engagement with a product hardly makes for the most meaningful cultural experience, but since I’ve maintained a small allegiance to the joys that J.K. Rowling’s work brought me as a child, putting my brain on autopilot for the ride was worth it.

There are several other sections to the Universal parks beyond the Harry Potter portions. I suppose I must have been vaguely aware of this prior to the trip, but glancing around at my fellow travelers, it became clear that nearly everyone had Potter largely or even exclusively on their mind in visiting this place. We forgot the rest of the park as much as Rowling’s wizards forget the unmagicked world.

A pilgrimage is a retreat from normal life to a particular place to encounter a sacred reality; this trip takes you (and your wallet) from normal existence to commune with the life you wanted when you first opened those books. It’s a pilgrimage for modern man. But it’s a fake communion, because no one lives in this empyrean: it’s just your fellow travelers, and Harry is still just pixels on a screen and illustrations on paper. The spires of churches are replaced by the plaster towers of Hogwarts, faux echoes the British cathedrals on which the set is based.

As I said, the park remaps the much-desired Harry Potter Wizarding Universe onto a real-world facsimile, letting fans aged 7 to 77 indulge their longing to visit pop culture’s most recognizable realm. And in so doing, it’s surprisingly realistic. I admit I wondered how fully fleshed-out the castle is, so convincing was its imposing presence at a distance, and I imagined myself trouncing up Hogwarts’ iconic staircase.

Its expanse was not such. In fact, the entire interior was exclusively designed as a line for the virtual reality-infused roller coaster in a giant hanger on the other side. Nonetheless, it was by far the most thrilling line-wait experience I’ve had: the famous rotating griffin sat in solitude just behind the fake greenhouses, convincingly pastel screens appeared as talking portraits, and one full-sized classroom even awaited ride-goers. A longer line almost made for more fun as you drank in more of the castle scientifically designed to confuddle your senses and perk your inner child. The fakeness, placed there to entertain you during what would otherwise be a dragging wait, manages to be fun.

Not all views are strictly convincing of this magical facade, however. A wand hovers several inches above a violet cushion at Ollivanders, and it takes close scrutiny to notice the thin wires that produce the magic (I thought it might be magnets). Digital menus emblazon the Leaky Cauldron and Three Broomsticks’ overpriced contents at their entrances, and hot butterbeer is served in a mystifyingly Muggle to-go coffee cup. A wizened wooden door left ajar for a moment reveals a concrete maintenance hallway illuminated by blinding fluorescents and not soft wizardly lamps. Typically corporate logos embroider every gift shop’s wares, and the shops themselves number more than the rides. Even the convincing castle line ends in a conveyor belt, robotic arms, and roller coaster seats. “Interactive” wands that let you digitally enchant a few well-placed attractions have a large bulb on the end and cost an extra hefty buck. (The bathrooms too are modern, mercifully.)

The “magic” is as much a simulation as the virtual reality rides that fill the park. These take you through plotlines in which your favorite witches and wizards talk directly to you as though you’re an agent in the universe you know and love. Voldemort sneers in your direction, Bellatrix hexes you, and Harry and Ron desperately plead your help as dementors swing down on your mine cart. But these stories, your chance to shine in the Potterverse, are unbearably scripted and impersonal — the magical monsters are naught but puppets and strobe lights, and Harry remains as ever a figure on a flat surface.

As you wander the streets of the Wizarding World, though, it’s easy for your mind to wander as well, getting lost in the world the park is designed to mimic. The music, which never stops and maintains a constant volume as to feel appropriately cinematic, helps enormously in this. Despite all the reminders of modernity that pepper the place, a simple stroll along the cobbled streets can be enough to detach your active attention and get you lost in the storytelling dreamtime Rowling and Warner Bros. have manufactured for our society. The stuff of folktales has successfully become franchise.

From one precise vantage point in Hogsmeade, I could pause my gaze for just a moment. Looking dead-on towards the model castle from this particular point near the gate, no warehouses caught my eye, no planes flew overhead, and if I inclined my gaze just enough, the Muggle garb and electronic and mechanical vendors were indistinct. For a shining moment, the 12-year-old that still apparently lurks somewhere inside me could pretend it was all real before letting that sweet flavor of a faked fantasy fade away.

The Wizarding World allows you to escape down a rabbit-hole into a projection of the magic you’ve dreamed of, and the universe you often visited while curled under the covers late at night, praying Mom wouldn’t pop in and find you up reading past your bedtime, suddenly sees the light of day. The multi-million dollar venture delivers on its promise to pretend just for a moment that this is all perfectly real. But in the end, it isn’t: a single glance and willfully forgetful mind can provide only a moment of solace to the visitor who longs for the straits of Diagon Alley, and no amount of Muggle machinery can truly transfigure the plaster castle into the halls of Hogwarts.

A guest gets the fleeting feeling of Apparating into Harry’s world, but at what price? The answer may, of course, be found on the website for the park’s ticket purchase portal.